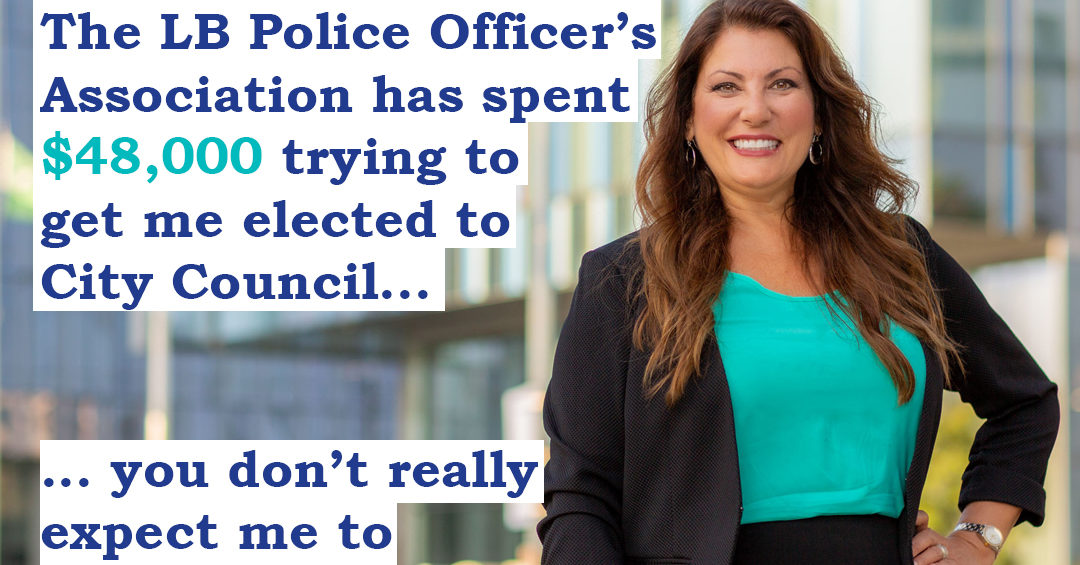 Talk is cheap. This last Saturday, Cindy Allen for City Council sent out a blast email to her supporters entitled “The Death of George Floyd Exposes Failures of Police Reform and the Systemic Racial Inequality in our Country”. In that email she stated, “I am calling on police officers across the country to join me in speaking out against these injustices…” in reference to “George Floyd, Ahmaud Arbery, Breonna Taylor, or the numerous other men and women of color who deal with the systemic racism present throughout this country.”

Yet she made no mention whatsoever of instances of systemic racism documented in the force while she served as a field training officer, vice officer, and gang investigator from 1989 through 1998. The year she entered the force was the same year that Don Jackson, a black man and anti-
police abuse activist, was famously documented by NBC News having his head shoved through a plate glass window by an LBPD officer who then filed a false report on the incident.

Neither did she make mention of the City’s mounting police abuse settlements in recent years (over $30m in 5 years), the corruption of the Citizens Police Complaint Commission (which is used to cover up both police abuse of residents and special treatment of elected officials like outgoing Councilwoman Pearce), nor any of the most tragic, unjust incidents of officers involved shootings, such as the gunning down of Doug Zerby or Sinuon Pream.

In short, Cindy Allen has been compromised on the topic of police reform and it shows.

But what truly compromises Cindy Allen is the approximately $48,000 in campaign cash spent in the primary to get her into a runoff position with Robert Fox and buy yet another council seat for the LBPOA. If Cindy Allen wants any credibility on police reform whatsoever, she must immediately return the following contributions. She can do so by making equivalent donations from her general election campaign to anti-police abuse organizations.

There is a saying, ‘once bought, always beholden’. Not only must Cindy Allen donate the full equivalent amount spent by the police union on her campaign, she must commit to donating $2 for every future $1 of LBPOA “independent expenditure” money spent on her behalf in the runoff, to prevent a repeat of the police union’s cash frenzy. She should also reject the LBPOA endorsement.

If she refuses to take these measures, she is admitting that she is bought and paid for by the single largest, most powerful special interest lobby in the City of Long Beach, LBPOA.

We cannot have a councilmember with such a massive conflict of interest on this issue at a time like this, when the George Floyd murder has ignited a massive awakening on police abuse and practices, systematic racial inequality, and police political power.

How can Cindy Allen hold a corrupt system accountable, so long as she and her campaign is profiting so massively from it? As recently pointed out both in the New York Times and by syndicated California political columnist Joe Matthews, the primary obstacle to police reform is the political power of the police unions. There has never been a more direct embodiment of that political power than the candidacy of Cindy Allen.

Robert Fox on the other hand has fought police abuse since the early ‘90s when he worked with a coalition to oust then-police chief Larry Binkley, who used his officers (likely including Cindy Allen), to oppress and entrap members of the Long Beach LGBTQ community. Today, Robert is calling for an independent review of instances of police abuse reported (and generally buried by city management) to our non-independent Citizens Police Complaint Commission and will soon roll outa set of proposed police reforms.